Nord University has succeeded in implementing a more proactive crisis management methodology, thanks to the use of the CIM Meeting module.

Crisis management meetings are now organised and conducted based on templates, facilitating structure and efficiency. The module also keeps track of those who have attended, decisions that have been made, and tasks are distributed and monitored.

The module was tested full scale during the rescue exercise ”Exercise North” and proved to be a vital tool for proactive crisis management.

Nord University is a young university with strong regional ties and a global perspective, founded and accredited January 1st 2016. The state-owned higher education institution’s main campus is situated in Bodø, with eight other campuses along Norway’s coastline; in Vesterålen, Mo i Rana, Sandnessjøen, Nesna, Namsos, Steinkjer, Levanger and Stjørdal. The university has a total of 12,000 students and 1,200 staff.

Nord University also operate NORDLAB, with advanced simulator units for emergency preparedness. NORDLAB – Nord University Emergency Management Laboratory – is a tool for training, emergency preparedness and deployment leaders, and testing of new technology and new systems in crisis and emergency response management. The students use CIM in their training and in the simulation exercises. Here, crisis management at all levels is simulated; including management within SAR and Oil spill response.

The emergency management team at Nord University conducts two exercises each year, a tabletop and the big full-scale ”Exercise North”.

”During the annual exercises we experienced, among other things, difficulty running effective and structured meetings when managing a crisis. The meetings were complex, and we had no common understanding of decisions made.”

The crisis room at Nord University is usually staffed with two loggists as standard. But the number of other key personnel in the room will depend on the situation.

”Typically, our incidents are related to events that can escalate, and initially only require a smaller team for monitoring how the situation develops. An example of this is the plague outbreak in Madagascar in the autumn of 2017. We organised return flights for eight of the university’s students who were on an excursion in the country when the plague broke out."

"The fact that the crisis management team varies depending on issues, makes it even more vital to follow a structured agenda. Different crisis managers have different ways to manage. This is challenging in terms of consistency and stresses the need for structured status meetings that follow the same agenda. In short; we needed a more proactive crisis management methodology."

Nord University decided to implement the Meeting module of their CIM installation, to organise and conduct meetings during crisis management, including both exercises and handling of real issues. Each type of meetings now has its own meeting template with structured agenda items, attachments and tasks.

The module was implemented with a set of agendas and tasks. It was then put to the test during the extensive full-scale emergency exercise ”Exercise North” in April 2016.

During the exercise, the team conducted all meetings according to a set schedule and distributed and monitored tasks in real time. The use of the meeting module proved successful, Lagesen says:

”The meeting module contributed to the meetings being conducted according to a common agenda that everyone was able to follow on-screen. If the emergency response officer deviates from the agenda, other personnel in the room will correct them. Assigned tasks are now also linked to the decisions made and instantly logged. Status is then also followed up in the next meeting, where we can evaluate whether the tasks have been completed or not.”

A crisis management meeting now typically lasts 20 minutes, before the participants return to their tasks.

In addition to more effective and structured meetings, the implementation of the meeting module hade another important effect, Lagesen says:

”We also found that the use of set agendas and templates contributed to less stress and uncertainty, and as a result, a more relaxed setting in the room.”

Nord University were able to generate impressive results thanks to the implementation of CIM. If you’d like to discover just how comprehensive and universal true incident and emergency management software can be, why not get in touch with One Voice and see what we can do for you. 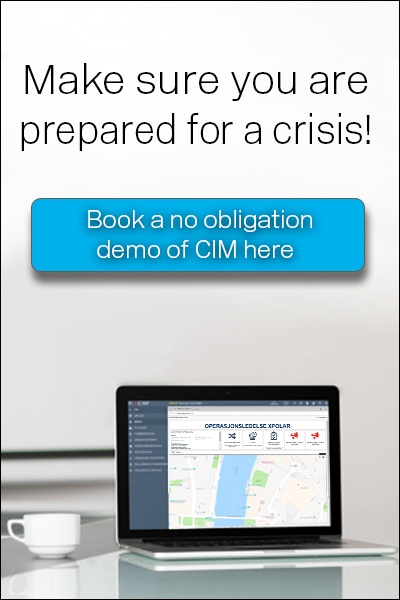 Do you have questions regarding our services?

Please contact us by email, phone, or by the form below to learn more about emergency and crisis management
Send us your questions and get answers